Looking back at my post natal depression today has been really emotional.  I think it’s the worst I’ve ever felt in my life and once, my GP even asked me if I wanted to be admitted to hospital.  We all know what kind of hospital she meant.

PND was the most overwhelming depression I’ve ever gone through, and what makes it worse is that you can’t offer yourself to it, drown in it until the tide recedes; you absolutely HAVE to function, and look after that little thing that sparked it, even though it’s not her fault at all.

Those first few weeks are like a kaleidoscope – fractured glimpses of memories, feelings, moments (good and bad).   I see her in her cot, in her bouncer, on her play mat, falling asleep whilst transfixed on the ceiling fan, sleeping in a cradle in the hallway rather than her bedroom, because that summer was so hot, and the hallway was the coolest place in the house.

I’ve forgotten a lot of the exhaustion, the endless nights of interrupted sleep, the projectile diarrhea, the way her cry knifed through me (though I get an echo of it if I hear a baby in a supermarket with exactly the same cry), the numbness of the clock that would not tick fast enough, having no emotional support from the movie star boyfriend, and feeling like a single mother, even then, just before we got married.

I also remember a whole library of coping mechanisms, and I think they’re important to share.

I vividly remember holding my daughter when she was just a few weeks old, and weeping as I fed her her bottle.  And then stopping myself, knowing that I could not be THAT mother.  I was gripped by a fear that this little 4 week old would absorb the sight of me crying over her and be scarred for life.  I knew I could not let that happen.

What happened instead was that I ended up being a mother who grabbed at every offer of help and company, and as a result Beth was bottle-fed by a LOT of people in her first few months, bless her.  But I think that socialised her in a way I could not have foreseen, and it made her unafraid of other people, in a way that I don’t see with breastfed children who have never left the mothership.

Yes, back to the breastfeeding.  I get why it’s “best for baby”,  but oh my god, I was so relieved when we switched to the bottle after 2 days of hell and more temper tantrums from the movie star boyfriend than I could handle.  Again, it helped ease some of the load off me.  Anyone can bottle feed a baby, and for us, as a family, that was definitely a healthier choice. 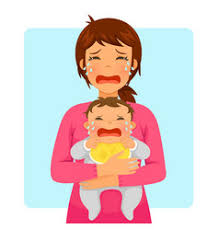 Looking back, I wish I felt then how I feel now.  I wish had cooed words of love to her, stroked her cheek more, and inhaled the smell of her, allowing her to invade my every pore.  But I couldn’t.  I was fighting a war, and me surviving it was the primary objective.

Instead I found weird ways to cope.  I photographed her every day – outfit of the day, trying to find the perfect smile – and documented a life that I was observing rather than being immersed in.  But do you know what, all these years later it’s a beautiful record of what I missed.  I could see it then, but not FEEL it.  And I can now.

I said in the last post, my only way of coping was writing down how much milk Beth had drunk each day, because I knew if I got her to so many ounces, I was pretty much guaranteed a solid night’s sleep.  Sleep is the most essential thing for a depressive, and the fact that babies deprive you of that makes PND a very resilient and cruel adversary.

People laugh now when I say I used to look at Beth, after I’d fed her, and wonder what on earth I was going to do in the 4 hours til her next feed.  But it’s true.  That vacuum of time would fill me with panic, and I had no idea how to fill it.  I had no desire to hold her, cradle her, talk to her, and I also didn’t want her to sleep all day and wake all night.  Eventually we gatecrashed our way into a routine, and we had lots of afternoon expeditions, and doctor’s appointments were a blessing for eating time, but it was always me battling with it, rather than just rolling with it.

I can’t thank the kindness of strangers enough, all the people who offered to take Beth even for an hour to give me some respite.  Key in this were 2 neighbours I had never even spoken to before who looked at me and just KNEW, and were there to save me for 2 hours every day, just so that I could catch up with myself.

Eventually the cure didn’t really come from me.  It was partly the drugs, and also partly that Beth went to nursery from 6 weeks old.  For me, it was essential to try and find my way back to my old self, and work was the only way I knew how to do that.  It had also become the very thing that defined me, and being away from my baby allowed me to commit to her more when I was there. 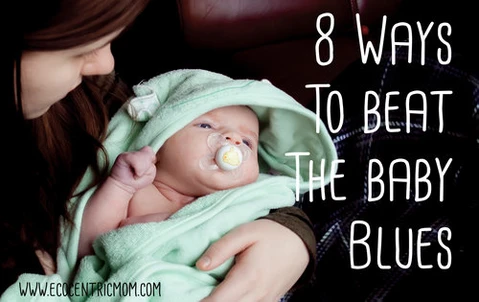 When I’ve been looking at graphics for today’s posts, I’ve gotten quite upset, for 2 reasons.  Firstly if you Google “post natal depression” you see a lot of staged photos of mothers in the grip of it, and I’m instantly back there.  I see them.  I feel them.  I remember that agony so well, and it’s heart breaking to be reminded of it so viscerally.

The second emotion has been anger.  Just as some of the images have been hyper-real, others have spoken of The Baby Blues, and that just fills me with fire.  It’s not some cutesy, 1950s, brush it under the carpet tagline, it’s a REAL medical illness.  That people can be so reductive is enraging, and why the stigma persists.  PND was one of the hardest things I’ve even been through – it literally hit me like a truck – and I wanted to completely disappear.  At times I wanted my baby to disappear too, which is not to say I wished harm on her, but I just ached so badly for a life that didn’t include the agony I was stuck in.

That is NOT Baby Blues.  That is mental illness.  It absolutely kills me that people can reduce it to something that sounds so harmless, so temporary, so lightweight.  They are probably people who have never experienced it.  No one who has gone through it would call it something so dismissive.

If you’re going through it right now, I hope you’re getting help.  There is no shame in PND, it is after all, a hormonal imbalance caused by the onslaught of pregnancy, and we need help to recover.   You are not alone, even though you will feel the most alone you have ever been in your life.  You can get through it, but please own it, admit it, and reach out.  A better life awaits you.

As for me, well every week and every month I loved Beth more.  Don’t get me wrong, there are days I do not love her at all, but that’s the joy of having a teenager, right?   There is a way through this.  We are not all earth mothers, and that is absolutely fine.