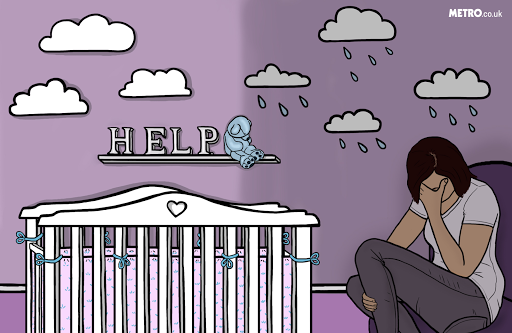 Post natal depression is a kick ass poker player.  It doesn’t hit you 1-2, 1-2 like a boxer would.  No, it prefers to screw with your head so that you actually think you’re fine, even though you have never been so far from fine in your life.

It lets you think you’re getting away with it, even though you’ve battled depression twice before.  You know the signs, you’re braced, you’re aware of the growing numbness, but this doesn’t stop you hoping you are wrong.  Even when the amazing movie star boyfriend leaps in with his self-pitiful, “this is great, I just fucking knew it”, you wonder why you didn’t, and why you are so disappointed.

For the 2 days you were in hospital, you thought you were coping.  You smiled at your visitors, you generously let everyone who wanted to hold and snuggle your baby, you even managed to change baby’s clothes (you try not to dwell on the fact that it took you half an hour to summon the courage to even attempt this).   You dismiss as normal the way her cry knifes through you, and how very very grateful you are when the nurses take her away to the sleep ward.

It’s only 1 week later, at the insistence of your wonderfully honest GP, that you will face the truth – you are only fine when you are not being a mother.

I was always adamant I would never have children.  I always knew I wasn’t maternal, and that really deep down I was far too selfish to be a mother.  My own had been amazing – loving, selfless and inevitably a little smothering – and I knew that was not an existence I could subscribe to.  Inevitably, it took her death to make me realise what I had lost and how to regain it.

Even when I was pregnant, I think I was more in “shopper” mode.  It’s very exciting having a whole new room to design and plan, and a whole heap of clutter to buy for it.  And let’s not forget, baby clothes and soft toys are very very cute and very cuddly – they do indeed make you go aaaah.  Funnily, I never realised I was buying them in a standalone sense, rather than for a little someone to use.

And then there’s the whole garage full of crap required for the baby just to function – prams, car seats, sterilisers, bottles – it goes on, as does the quest for the “perfect” one.  Such a little person, so much clutter. 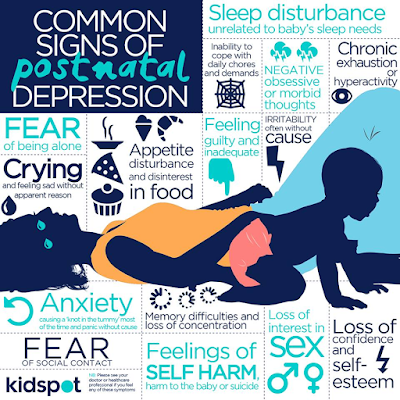 And so on the day you leave hospital it really really dawns on you, with the sensitivity of a hammer, that however you walked in, you are walking out as a mother.  What the hell does that mean? And how am I supposed to do it?  I’m great at my job, ok as a girlfriend, positive as a person – but no one taught me what this motherhood malarkey means.  I am acutely, rawly aware that I really need my own mother to illuminate the path.  Stubbornly, the path is depressingly dark.

By the time the movie star boyfriend arrives to take you home, you can barely contain your nerves, your fears or your rage.  You have been trying to telephone him all morning – now he tells you that he didn’t answer the phone because he was determined to enjoy his last lie-in of his adult life.  WFT?  Did I seriously have a baby with this piece of shit?

The first couple of days at home are bewildering, scary and like nothing I have ever had to cope with before.  For the first time, I do not have all the answers, or know how to find them, or have any confidence in what I am doing.  The baby monitor which I considered essential is just annoying – if the baby’s finally asleep, I can’t cope with the stress of listening to her sleeping.  Knowing my bubble of peace could be punctured at any minute is almost more than I can bear.

Due to the caesarean, moving is difficult. My ankles still look like concrete pillars and my head is a mess.  I have never known a tiredness so deep or so inescapable – like a tide pulling me under, all I want to do is drown in it.

And there’s so much to do.   When the baby is awake it needs watching or interacting with.  And when it’s asleep there’s bottles and sterilising and all that crap to do (Beth thankfully having given up on breast-feeding just before the movie star boyfriend punched the wall because she wouldn’t “crack on with it”.)  Which is all fine, crap but fine, until you wonder when you’re ever going to shower again or have a meal again.  You’re not even fussy.  It doesn’t have to be a cooked meal, just any sort of meal.

And let’s face it, The Movie Star Boyfriend doesn't know how to look after you, how to put you first, how to be unselfish and just THERE.  He tells you it will be fine with the dismissiveness of someone not planning to make an effort to MAKE it fine.  But at least he’s there.  At least you’re not alone.

And then the bomb drops.  Almost as soon as the baby is home, your boyfriend has to go back to work.  You have felt his departure counting down like a nuclear warning for the last 2 days and suddenly it is here.  Your only response is to cry.  You are scared shitless.  How the hell are you going to cope with a baby for 12 hours while he is at work?  Alone?!  OMG, alone.  You.  You and the baby.  Alone.  The panic is shrill and all encompassing.  It has enslaved you – all you can do is think about it and how the hell you are going to get through it.

When you are alone with the baby, things are not good. 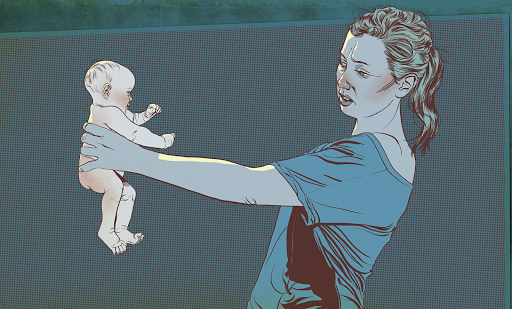 Things are in a constant state of panic and agitation.  You can’t settle, rest or relax.  And most of all, you want your old life back.  It’s not that you wish harm on your baby or wish her to cease to exist, you just want this to NOT be your reality.

You throw out a comment about adoption to see how it goes down.  The movie star boyfriend, with typical sensitivity, tells you you should have thought of that before you got pregnant.  Harsh, very harsh, but who is there to tell you these things ?  This is how the whole Silence of the Sisterhood started – a conspiracy of fertility, sacrifice and resignation.  No one tells you how hard it is, no one.  So how the hell are you supposed to know you can’t cope with it?

·       1.  You’re not eating.  For someone who loves food more than almost anything, this is always a bad sign

·       2.  When you are forced to eat, you eat Pot Noodle.  Since you have always described this as less nutritious than cardboard, this is a very very bad sign.

·      3.  In the night, when you can’t sleep because you are waiting for the baby to wake up (how sick and ironic is that) you wonder what would happen if the roof accidentally collapsed.  Not on your room, just the baby’s.

That’s my sickest confession.  I really did think that once.  And I didn’t even consider it worryingly wrong.

Bizarrely, it’s the little things that save you.  A control freak by nature, I find that if I write down exactly how much Beth has drunk, I will be able to predict how long she will sleep.  This gives me a measure of control over my day and makes life feel less random.  The victory is small, but valuable.

Big Brother.  Seriously.  It’s the year the Scottish religious one wins, and E4 is streaming it live, 24/7.  In a world where nothing exists except the baby, this stupid show becomes my family, my friends and my neighbours.  If I keep the TV on, I feel less alone.  I don’t talk to them (I am after all depressed, not mad) but just having them there, talking bollocks, keeps me a teeny bit sane.  Go figure.

It takes about 6 weeks for the breakthrough.  On the edge and at a loss, I beg my auntie if she would love the chance to have Beth for the weekend.  She gladly jumps at the chance and I immediately feel something like opium soothe through my veins.  All week I countdown to the magical moment, and actually talk to my daughter, telling her exciting things about her trip.  Eagerly, I bundle her into the car, and it’s not til she’s all the way down the road and out of sight that I realise what a very very wrong thing I have done.  I am consumed with guilt at the selfishness of what I have done and what I have put my daughter through (I’m sure she’s having a blast with her auntie, but that’s not the point).  I am overcome by a ridiculous urge to travel 50 miles and bring her back, and that, my friend, is when I finally accept I am a mother.  Standing there on the side of the road, forlorn at the departure of my innocent baby girl I feel like the lowest form of shit and know, just know, that I have to be better.  She is innocent, pure and innocent, and unless I want to scar her for life, I must stop wallowing and crack on with this motherhood shit.

2 interesting asides to the story –

Part of sending Beth away for the weekend was to spend more time with Steve, who promptly came home, didn’t notice she’d gone, decided we’d watch a film I didn’t want to see, and then feel asleep halfway through ...

And the next time my aunt and uncle visited, I was actually holding Beth.  It’s one of the saddest moments in my life that my uncle’s immediate reaction was not “hello”, but to say “well done, that’s the first time I’ve seen you holding Beth.”  Tears, sometimes they flow, and sometimes they really flow.

The drugs do work.  They started to stabilise me and helped me take baby steps with my baby.  They helped me resolve not to cry in front of Beth, however shitty I was feeling, because she did not deserve it.  They helped me want to be the mother she deserved, however inadequate I was, and eventually, they helped us decide to move to Lincolnshire, so that I could have a network of real people to support me, not just Big Brother.

That’s not to say the next 2 years were easy – they weren’t – but loving my baby became infinitely easier, and far easier than loving my movie star boyfriend.