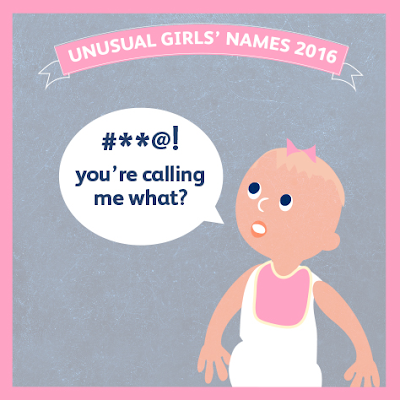 From the moment I found out I was pregnant, I have wanted to name the baby.  It took Herculean willpower not to name my future children the moment Steve agreed we should start a family (well, he didn’t so much agree as lack the self-restraint to disagree, such was my impeccable timing).

Convinced I am having a girl, it is girls names I focus on.  When we eventually contemplate the fact we might be having a boy, it will take 3 months of struggle to produce 3 names.  By the time I am 5 weeks pregnant I have 17 girls names to choose from.

I am big on signs, omens, the meaning of things; it’s just one of the perks of being an English Lit buff.  What disturbs me is how so many of the names I have always liked mean absolutely horrible things.  I now discover that friends have named their children after wreaths, horses and various degrees of melancholia.  Most disturbing of all, is that what I had always considered a really cute name – Molly, sounds so innocent, rhymes with jolly – actually means bitterness.  So Molly gets scribbled off the list.

We don’t want a wacky name, after all, we don’t want to scar our daughter for life; having Steve as a father will be challenge enough for her, but I also know girls like to be special, and something a little different may go down well.

I've always hated my own name.  It's super dull, and is probably the root of why I never felt special as a child.  I have had to create my own magic rather than being blessed by it, and I feel a great name is integral to great self "rootedness".

I am drawn to a book that suggests names to match star signs, and we are smitten with names representing light and angels for our little Gemini.  An early favourite is Ellien.  Different, but not too out there; it means light; it can be abbreviated to Ellie, a name we both love.   Then someone remarks how in the playground she will be called Ellien the Alien.  It’s amazing how quickly you can go off a name.

After about 5 months we take the plunge, and agree on the name which was always our joint favourite from the start: Elizabeth.   Classic, but offering our little girl a choice of names – Ellie, Lizzie, and our favourite, Beth.   It means consecrated to God, and believe me, there have been many moments when I have wanted Him to reclaim his consecrated child, but Beth it is, and it is a name we instantly love.   Now if only my daughter could learn to be as endearing as her name …..

It's ironic that we end up with the first name we both suggested.  It was me who denied it – despite loving it – because our surname is Taylor, and it just seems WRONG to name her after a movie star.  But I can’t have my second favorite either – EleanOR TaylOR – so one day I scream FUCK IT in the car, and Elizabeth it is.

I love middle names, and a long time ago, we decided one of her middle names would be my mother’s – Theresa.  We while away many evenings playing word games.  His parent’s initials spell GET and SET (lol, yes they DO!) and we come up with “hilarious” combinations –

Naming your child is a gamble – what if you accidentally inspire playground bullying and scar your child for life?  We are VERY careful what her name spells out …..

Her final middle name is sent by the angels.  There will be a bleak moment during the pregnancy when I am sent off for a CVS test to determine whether my pregnancy needs to be terminated like a woman grimly heading to war, and before I leave the house, the song on the radio will sing me the following words –

I shiver.  And I smile.  We both believe in angels, and we both believe this is a sign that everything will be alright (which it is).  The song is by a singer named Alice Martineau.  And just like that, Elizabeth Theresa Alice Taylor takes her place in our world.

It seems very preachy to suggest there are lessons here, but I think we did ok.  Our daughter has a name with tradition, angels and variety.  We’ve always called her Beth (we never liked Bethany as a name), but at times she has toyed with Lizzie, and I’m sure there will be a time in her life when she steps out in the shoes of a new spin on her name.

She’s only ever Elizabeth when she’s in trouble lol, and it’s good to give your child a name that can be shortened, but then peddled back to its longer version for maximum impact lol.

I’m glad we didn’t go for a trendy name.  How do you OWN that?  Earlier in lockdown, Beth and I went through her memory box, and she was gutted to know she was almost Ellien lol.  That’s the name she loved most from the long list, and it IS a cool name, but I’m still fairly sure she wouldn’t have enjoyed the Alien jokes lol.