Depression has been a big part of my life for more than half my time on this earth.  It's been more loyal to me than any man I've ever known, and is probably the longest relationship of my life.  It's taught me the darker colours of the rainbow, the sound of silent tears, and made me feel the absence of my very soul.  But guess what, I think I asked for it.

Being a teenager is a very confusing time.  Too many hormones, too much parenting, not enough freedom .. blah blah blah.  It's also a time when you're very much the star of your own movie .... and I was (and remain) the star of a tragi-comedy.  Back then, I hadn't learnt to embrace the comedy so all I was was .... tragic.

An only child, I became a very lonely and alone (and they are different things) teenager.  I longed to be an adult and hated every bit of myself and my life and my circumstances.  I wanted to be the centre of my own universe, and I wasn't.  I was alone at home, had few friends at school, was very shy ... and I so badly wanted to be seen and to belong.

I was a book worm, and I can't now remember what books I lived in as a teenager.  I know they were books written for adults, but I don't even remember what influenced me (and crucially, whether it was the 2 key texts of my life, Wuthering Heights and The Bell Jar).   What I DO know is that I had cultivated this image from somewhere of The Girl Who Was Waiting To Bloom, who just needs the right man to see her and free her from herself.

I think teenage hormones and PMS at some point encouraged me to take it too far.  I wanted people to "love" me, and thought if I was dark and silent, people would be concerned, interested in me and would be drawn to me.  We are all stupid when we are young.

I thought having depression made you interesting, and I so badly wanted to be interesting.  To take all the uncool parts of me and channel them instead into something rare and to be admired.  I felt that letting the darkness in would fill my empty shell and make me sparkle like coal dust.  It didn't.

I think it's Elizabeth Wurtzel who wrote that whilst madness is dramatic and exciting (I'm paraphrasing), depression is just .. dull.   It's boring.  It is pure absence, packaged in darkness, and stupidly I wanted it.  I wanted people to know that about me, to label me with it and instantly make me more glamorous and appealing.  I wanted to be the tragic heroine of my own empty love story.  I wanted attention.

I remember a couple of occasions where I deliberately cultivated my depression, or the perception that I had depression.  One was in a theatre-type classroom, and the other was on a rambling day on a geography trip.  On both occasions, I sat myself as far apart from my friends as I could and interacted with no one.  I thought they would care enough to run over to talk to me, to find out what was "wrong" with me, and to remind me why my existence mattered.  They didn't of course, which allowed my performed depression to start to take root within me, and which gave me plenty of self-hatred and pity with which to water it. 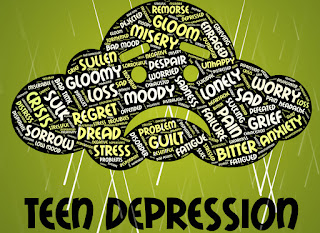 Depression is a like a plant, well, a weed, choking all life and hope away.  But like a plant, it needs to be watered to that it can spread and stifle you.  The teenage mandatory emotions of self-hatred and bitterness are perfect weed-fuel, and before you know it, the cultivated air of depression is giving way to something else, something deeper, and something you can't control.

Looking back, all I was was sad.  But (and this is key) the seeds of self-destructive self-talk were carefully being sown.  I was rewriting my narrative as The Girl No One Loves, the Girl Who Isn’t Attractive, and the Girl Who Will Never Be Happy, rather than rejoicing in the things that made me unique.

Depression is particularly good at that, rewiring you so that you only believe the bad things about yourself.  So that you only tell yourself things that hurt like acid, and burn yourself with a “truth” that condemns you to only feel the way you’re feeling – sad.

I remember thinking about killing myself – but I see it now as very abstract thoughts.  It wasn’t about ending things, it was absolutely a cry for help, the cry to be seen.  I would imagine timing it to perfection so that I would be discovered by one of my parents.  It was the anguished wringing of hands I wanted, not death.  The endless devotion, the being coddled like a precious, fragile wonder, and the certain knowledge I was the centre of somebody’s – ANYBODY’S – universe.

The irony here is that I was very loved as a child.  Almost smothered in fact, so there was no NEED for them to prove their love, I felt it every day.  I could not have wanted a more loving parent than my mother, and my father was practical if cold, due to his upbringing (and it’s interesting my suicidal fantasies were of my FATHER finding me, as if to shock him into an emotional existence, or to spare my mother the pain.)

So did I make it up?  Honestly?  I really don’t know.  I know the phrase “don’t draw down the lighting”, and I think I did do that, but I also don’t think the lightning would have been drawn to ME if there wasn’t some darkness in me, ready to be ignited.  It clearly scorched the earth for a path that would only become more well-worn with time.

I think my biggest crime (other than a need for drama) was naivety, imagining that depression could be shrugged on and off like a cardigan, when I wanted to.  I stroked the cardigan, coveted it, snuggled with it, but like the oh too warm-blooded person I am, what I really wanted was for someone (a boy) to rip it away from me and tell me that I didn’t need it.  That I was perfect without it. 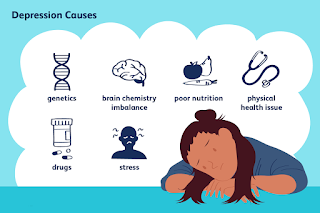 There is no time in your life as alien or as intense as when you’re a teenager.  It is literally mind-blowing experiencing all those emotions for the first time, and it’s no surprise that in some of us there’s a short circuit.  I remember being utterly miserable, feeling alone, misunderstood, like I would NEVER be understood …. But that’s not quite how depression feels to me these days.

I remember my parents telling me to snap out of it (owch, never a good tactic, that one), my friends telling me to stop being so miserable and bringing them down (harsh, but with hindsight, very true lol) and me finding solace in researching the tragedies of Marilyn Monroe and Sylvia Plath.

And yet through it, I had very few of the classic signs of depression.  Yes I was moody and miserable, but I still read 3 books a week, I was still a straight A student, I had a Saturday job at which I excelled, I didn’t lose my appetite (although I did gain a hatred for the way I looked), and I still did all the hobbies I had done before AND sang into my hairbrush lol.   There was no self-harm (mainly because, I now think, I was completely unaware of its existence), there was no need for medication (perhaps because my parents refused to acknowledge what I was feeling as a real thing; who knows, they may have been right), and there wasn’t the stifling feeling of the black cloud, magnetically clinging to you and suffocating you, although I did spend a lot of my time in bed.

Don’t get me wrong.  I firmly believe the seed was there, just waiting to be watered.  You can’t just INVENT depression, but I do think I was guilty of looking it in the eye and daring it to take me, at a time in my life when we were way too young to embark on a relationship.   I desperately wanted to be “fixed” and “looked after” and depression was my calling card, my way to attract that into my life (interestingly, that salvation NEVER arrived, and it would take me 30 long years to realise that you have to fix yourself).

Too much of my teenage years and my twenties would be spent waiting for life to swoop in and wave a magic wand at me, wasting my best years longing for something better, rather than going out and making it happen.  It’s a mindset that feels like it belongs to another person now, but it’s also the mindset of the depressed, when taking agency for yourself can be more exhausting than you can bear.

So what would I tell myself if I could go back in time?  To focus on what makes you happy.  Life will happen soon enough, but until then, don’t waste even a second wishing for a better one – either go out and grab it, or learn to be happy with what you’ve got.

Cinderella has got a lot to answer for.  There is no fucking fairy godmother.  There is no winning the lottery, or learning you’ve been adopted and your real parents are millionaires or movie stars.  There is only you, and there is only now, and if there is any type of key to life, it’s learning to make those 2 things the only things that matter.